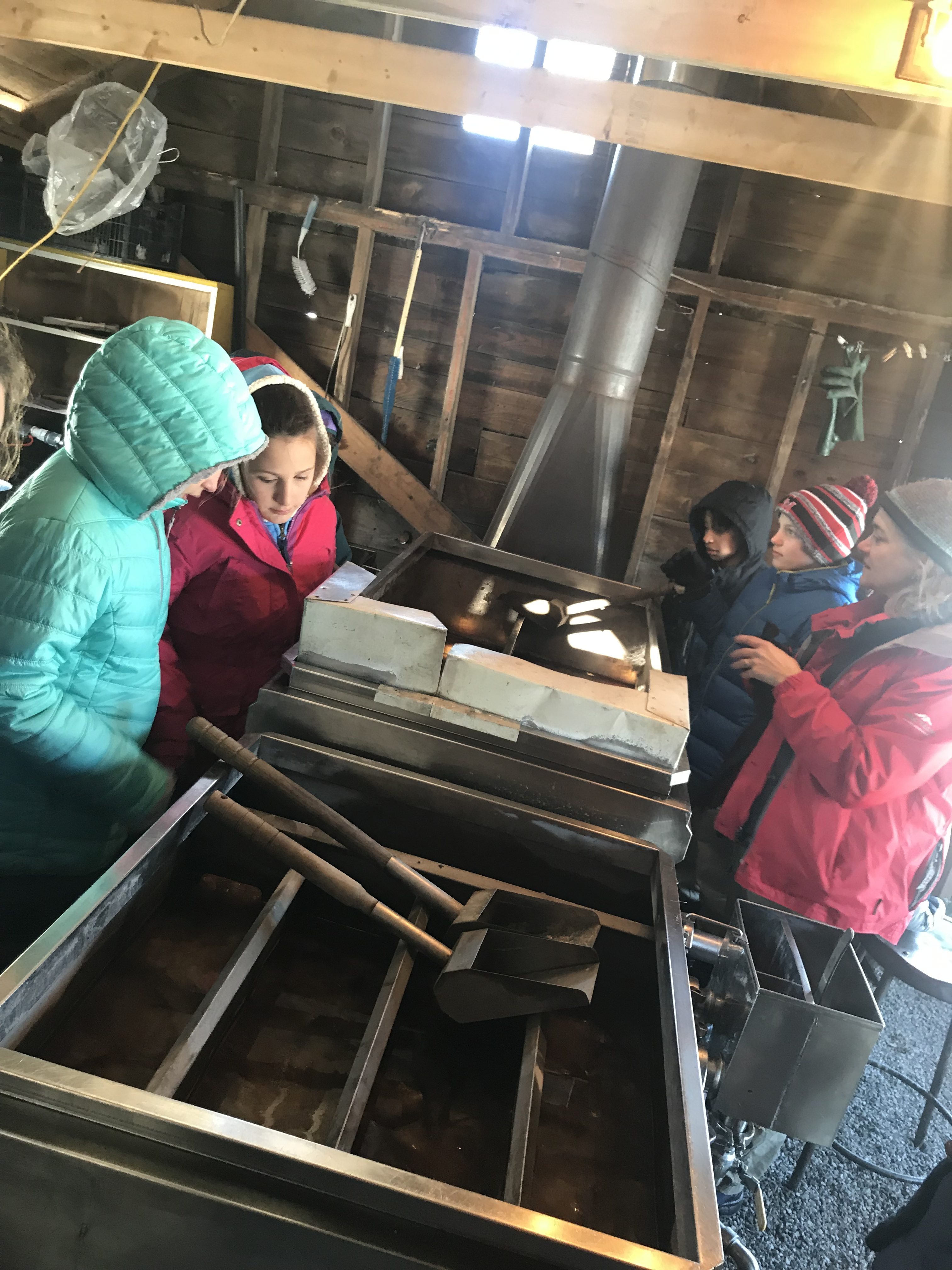 I called on my students to help me decide what lesson I should write about for the weekly SBCA Blog. Their ideas amazed me and they quickly started to write their own recollections down. Please enjoy these fifth grade perspectives of students’ favorite lessons from Writing, Literature, Religion, History, and a recent field trip.

Recently the 5th grade class drew names from a bucket. We discovered that the names were different past presidents of the United States. We were asked to research and learn about the name we were given. My president was Calvin Coolidge. I did not know much about him! Now I know he was the 30th president of the United States. He served from 1923-1929. What I found to be pretty special was that before becoming president, Coolidge was the governor of Massachusetts! Also, he was the only president to have the 4th of July as his birthday! I enjoyed learning about the great things President Coolidge did for America.

In Esther Forbes novel, Johnny Tremain, the main character is Johnny. He is a 14 year-old boy who lives in Boston during the start of the American Revolution. Johnny worked as an apprentice for a silversmith but tragically burnt his hand so badly he could no longer practice his trade. The virtues of courage, hope, and perseverance helped change his mindset to find a new purpose and path in his life! Johnny finds a different job delivering newspapers. This leads him to assisting the Sons of Liberty and even participating in the Boston Tea Party! Courage is finding the strength to go on. Hope is finding the light in the darkness. Perseverance is pushing on through difficult times! Johnny Tremain was a virtuous person and a character I look up to. I highly recommend this book!

Little John from Howard Pyle’s Robin Hood models many virtues but like all people he has some flaws to his character. Little John is an outlaw who lacks moderation, self discipline, and is running a thin line between eating a lot and being a glutton. Something about how he does his job is endearing despite his many shortcomings. Little John is resolute in his endeavour to diminish King John’s power and cruelty, has great courage in his hard tasks, and is extremely joyful in all his work. Little John is very loyal to Robin, Marian, and the rest of the Merry Men. If you were strolling down a sunny Sherwood path you would most likely hear his boisterous voice singing a hearty tune. (This students wanted to reflect on reading “Robin Hood” from Grade 4, The Medieval Year.)

In religion class we had the privilege of reading the story of Saints Perpetua and Felicity on their feast day. The story started when a bunch of catechumens were arrested and among them was Perpetua, a newly married woman who recently had a baby, and a slave girl, Felicity. They were to be sentenced to death if they did not do a sacrifice to a pagan god. They showed a tremendous amount of courage which is being strong and doing what is right in the face of fear. They also showed faith by praying to God and finding light in the darkness when they were condemned to death. At the Roman Coliseum, they were thrown to a mad heifer in robes loose without belts. The heifer tore their robes and flesh but did not kill them! The mob decided they wanted a gladiator to killed them with a sword. This was an intense story that really caught my attention! I think they are two great saints to pray to during our Lenten journey, to ask for forgiveness and temperance to moderate our lives and live not how we want to but how God wants us to.

“You must all stand fast in the faith and love one another.” – St. Perpetua

One Monday morning I came into my classroom like usual to unpack. Then I saw British soldiers (paper versions) all over the classroom. On the board I saw a message from King George the Third. Our pencils and pens were being taxed! I wasn’t too shocked because in History class we were learning about the American Revolution, specifically the Tea Tax, the Sugar Act, the Currency Act, and the Stamp Act. As our week went on, “King George” declared more and more taxes on our classroom: our chromebooks, the pencil sharpeners, and even our chairs! We had to pay shillings to King George (aka Ms. Raplinger, Miss G, and Mrs. Thackson) to use these items. We could earn shillings by helping out around the classroom. Our taxes become quite irritating but compared to what the colonists went through, it was nothing at all. On Friday of that same week our class planned a “rebellion” against King George just like the colonists. We learned that it was a very hard time for the colonists and I’m very grateful that we don’t have those unfair and unjust taxes. “No taxation without representation!”

History class has become my favorite subject this year for many reasons! I love that our teacher, Miss G, often dresses up to get into character for class. Sometimes she walks in wearing a big, white wig and a tricorn hat! Recently, we read about all the taxes that King George was putting on the colonists and we acted like we were a part of it! We got taxed on pencils, pens, the sharpener, our chairs, and even the chromebooks! We had to pay “shillings” to be able to use these things. A new tax was introduced each day but on Friday we had a rebellion! My classmates and I declared that we didn’t want King George making decisions for us! I brought in blue ribbon with tea bags on them representing the Boston Tea Party. The 6th grade (“the French”) even brought us more pencils (“supplies”) to assist us! I can’t wait to see what we learn about next!

A couple of weeks ago I entered the classroom on a Monday morning and to my surprise I saw British soldiers all around the room! I looked on the whiteboard and saw a message from none other than the King of England, George the Third! He was declaring something called “The Intolerable Acts” and was taking over our classroom! Throughout the week, my classmates and I had to “pay” taxes on using things like pencils, chromebooks, and chairs. We had to earn “shillings” to pay for these simple things that we needed. By about Tuesday or Wednesday it was getting hard to pay for things and if a classmate “ran out of money”, they had to borrow from a friend. This led to some of us being in debt! At the end of the week in History class, Ms. G encouraged us to stand up for what we felt was unjust. We especially loved “rebelling” which meant we wrote our own version of the Declaration of Independence. We even hung tea bags on the classroom wall (signifying the Boston Tea Party). Even though we all had fun, we found it very hard to balance what we wanted vs. needed on top of what we could afford! In a small way we now understand some of the difficulties the colonists felt during this time and why the Sons of Liberty were so eager to start a rebellion. It was an awesome activity that everyone loved and no one will forget!

Last week, my class took an exciting trip with the Kindergarten class to the Natick Community Organic Farm. We were visiting the farm to learn about maple sugaring. This was because we had recently finished reading our class novel, “My Side of the Mountain” and the main character, Matt, made his own maple syrup! Farmer Chris started our tour by telling us how Native Americans in New England first started to make maple syrup from sap. Then the colonists developed their own version. We found out that New England is one of the best places to tap sugar maple trees and  turn sap into maple syrup! The best part was all the activities we got to do like drilling a hole into a maple tree and tasting some frozen maple syrup after visiting the “Sugar Shack.” It was also exciting to see the tiny piglets running around! Overall, we learned a lot and it was a fun experience!

Last week we went to the Natick Organic Community Farm. A nice lady talked all about how maple sugar was made in the olden days. We got to drill holes in stumps of maple trees. It was really cool! Then we got to feel how heavy the black iron buckets were that the colonists used to boil the maple syrup in. After that we walked around the farm to check and see if there was sap in the buckets hanging from the sugar maple trees. Since it was a very cold morning the sap was frozen solid! We visited the farm’s “Sugar Shack” and talked about how the sap turns into syrup in the here. Farmer Chris scooped some frozen syrup out and we got to taste it. It was delicious! She told us that after every batch of syrup made the farmers draw tally marks on the walls to track how much they make each year. Some years were better than others. The farm was really fun to walk around. We saw dogs, chickens, goats, sheep, a lamb, a mama pig and 7 piglets! The piglets squealed and ran away when they saw us. At the end of our tour we got on the bus and went back to school. I had a great day at the farm!