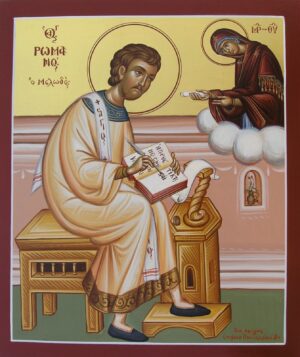 We all have God-given talents that we are called to share with the world. One talent that lies within each of us is our voice. Whether it is singing on or off-key, music is a powerful tool that inspires and connects. This Saturday, October 1st, is Saint Romanos the Melodist’s feast day. He was born in the 5th century and is known as a composer and hymnographer.

St. Romanos didn’t always have the gift of song. He was of average musical talent but had a deep desire to praise and glorify God. During his life, the tradition for morning prayers was that a choir member would step out in the middle of the church and would sing a Kontakion (hymn) on a major feast day. This hymn would explain the meaning of the feast celebrated that day. Oftentimes, the singer who stepped out would improvise the hymn and come up with the words on the spot. This was an extremely honored position and was only granted to those who were musically talented as well as educated enough to compose such a hymn.

Around the time of the Nativity of Christ, St. Romanos had a sincere longing to glorify the Virgin Mary’s new-born Son and be one of the choir members who stepped out to sing a hymn for the feast. At the end of evening prayers, St. Romanos found himself before her icon and asked her to help him. When he went to sleep that night, he had a vision of the Virgin Mary holding a small scroll in her hands. She instructed him to swallow the scroll and when he did, he immediately woke up. The room was empty but he had an immense feeling of joy and excitement, with his mind filled with beautiful and sacred words. The next day, during morning prayers, he was not afraid to step out and sing the kontakion hymn. When he did, a melody came out that he had never heard before with words arranged by themselves. No one in the church had ever heard the prayer before and asked him who had taught him the beautiful hymn. He humbly recounted the vision and the gift he had received and gave thanks to God. From that day on, St. Romanos used his gift gratefully for the rest of his life. He developed his God-given talent and composed thousands of hymns that are still sung today.

The gift of song transformed Saint Romanos’ life and inspired those who worshiped alongside him. Oftentimes, when we begin something new, we struggle in learning it and are average at it. Rather than deciding to give up, we are called to use everything in life to glorify God and offer our abilities back to Him. Saint Romanos’ life teaches us that “every good and perfect gift is from above,” and it is not us who perform these gifts but rather God within us (James 1:17). As we begin this new academic and liturgical year, let us not underestimate the power of prayer and embrace the journey of struggle towards improving our areas of weakness. May Saint Romanos and the Mother of God intercede for us and allow whatever gift we are hoping to cultivate be for God’s glory.